After the theatre, I text messaged my friends Ken and BJ Beasley who moved to New York nearly two years ago. We had arranged that we would meet up after the show to see their apartment (a view of the city lights that is impressive) which is a block away from the August Wilson Theatre.

Ken asked us to join BJ who was waiting for us at Tout Va Bien , (311 W 51st St, New York NY10019) where BJ introduced us to Christopher the owner who was much busier on a Sunday evening than most restaurants are on a Friday night.

There was a couple from France sitting to the left of BJ and the accents were clearly more of an International flavor than New York. But it was the atmosphere of the family style dining and friendliness of the staff that made the experience so special.

BJ told us how she and Ken have become part of the neighborhood and have built stronger relationships with their New York neighbors than they ever did with their Danville, California neighbors. 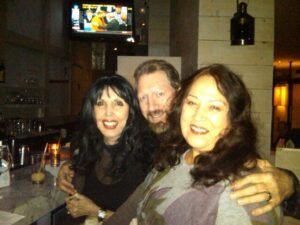 Most people don’t think of New York as being a friendly place, but we have found it to be the case the majority of our interactions with nearly everyone we had an exchange with. Sure there have been wild taxi rides and a bit of pushing and shoving on the subways, but that is as much a part of New York as the amazing skyline or Times Square.